The Critical Skills for Life and Work Conference

The Critical Skills for Life and Work (CSLW) project conference took place on Friday 21st June 2019. The free one-day event was hosted by Newcastle University, in partnership with Action Foundation, the University of Graz and Fryske Academy.

Months of advertising paid off and the conference was attended by 100 people from both the UK and overseas. The audience was a mix of academics, refugee professionals, language teachers, as well as people working for refugee charities and other agencies. The conference gave attendees the opportunity to learn about the project and its outcomes, to take part in discussions with language teachers and researchers, and to learn about the lives of refugee professionals.

After some initial networking over morning coffee and a short welcome speech by project coordinator Dr. Tony Young, the first event of the day was the launch of a newly developed learner and teacher online toolkit. Dr Alina Schartner and Stefanie Schneider (Newcastle University) gave a project overview and demonstrated aspects of the toolkit – it is available as a free download in three languages (English, German, Dutch) on the project website: http://cslw.eu/toolkit/

The toolkit launch was followed by a series of talks by academics and researchers. First, Professor Steve Walsh (Newcastle University) spoke about ‘The place of materials co-production in evidence-based reflective practice’. Then, the Austrian project partners, Professor Sarah Mercer and Sonja Babic, gave a talk on ‘Resilience as psychological resource for highly skilled refugees’.

Cor van der Meer then spoke about the work of the Mercator Research Centre on Multilingualism and Language Learning, before two Dutch language teachers, Laura

Nap & Jacqueline Veldstra, gave the audience some insights into their work with refugees in the Netherlands.

After a busy morning, attendees networked over a well-deserved lunch in the Courtyard campus restaurant. 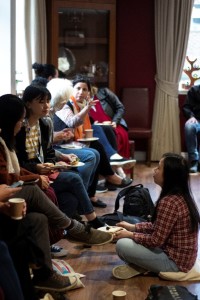 The afternoon began with a talk by Nicola Brooks of Action Foundation, who spoke about the work of the charity in supporting refugees in Newcastle. Dr. Sara Ganassin (Newcastle University) then introduced two refugee speakers whose ‘success stories’ were undoubtedly the highlight of the day. Sirak Berhe Hagos shared his journey from leaving Eritrea as a refugee to successful entrepreneur in Newcastle. Bahar Maryam Khesrawi, originally from Afghanistan, then spoke about her experiences of running her own women’s refugee charity in Leeds. 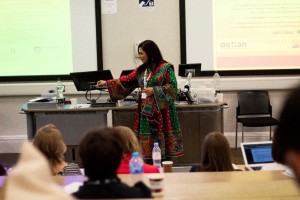 The speakers were then invited to take part in a round table, giving the audience an opportunity to comment and ask questions. The talks were well received and the conference feedback was highly positive, with attendees highlighting in particular the excellent speakers and the friendly atmosphere. 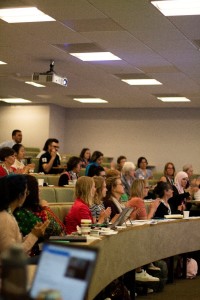 The day concluded with a drinks reception, followed by dinner for the project team and speakers at a local Indian restaurant. 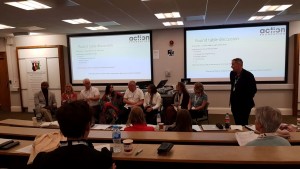 Concluding round table with speakers